Hey everyone, I thought I'd share my own recent C64 build after feeling inspired seeing the others. I'm an Amiga guy but finally decided to venture into C64. I have a specific brand of "purism" where I like to use the original chips but everything else is fair game. Because of that, I chose the C64 Reloaded for this build, as it allows me to do that.

Parts: Accessories: Here is a picture of the inside of the case, probably nothing you haven't seen before. 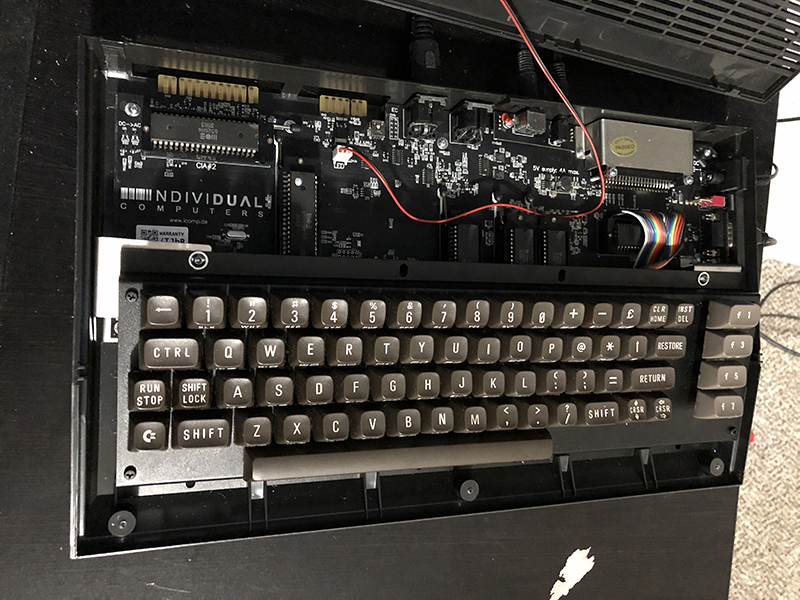 I liked the look of the blue LED, but I also like the irony of blue LEDs not having been invented until the 90s. 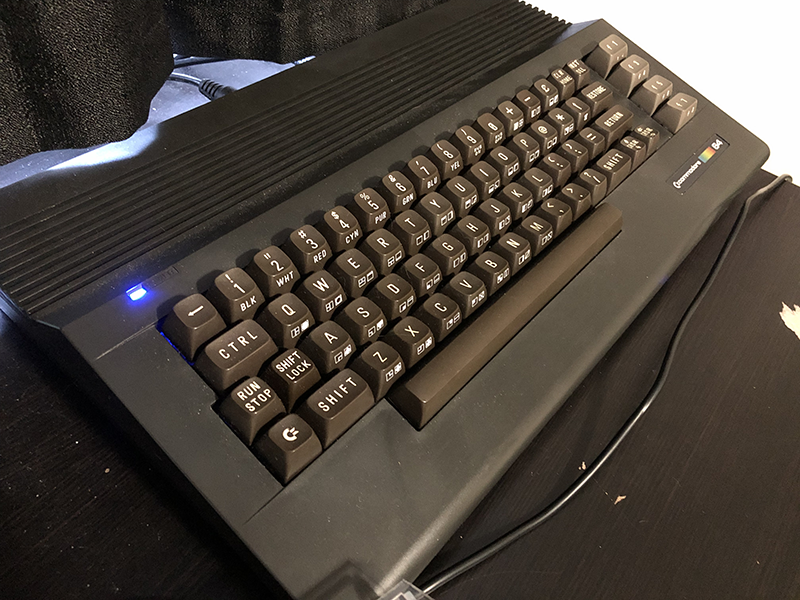 And here's the whole family. 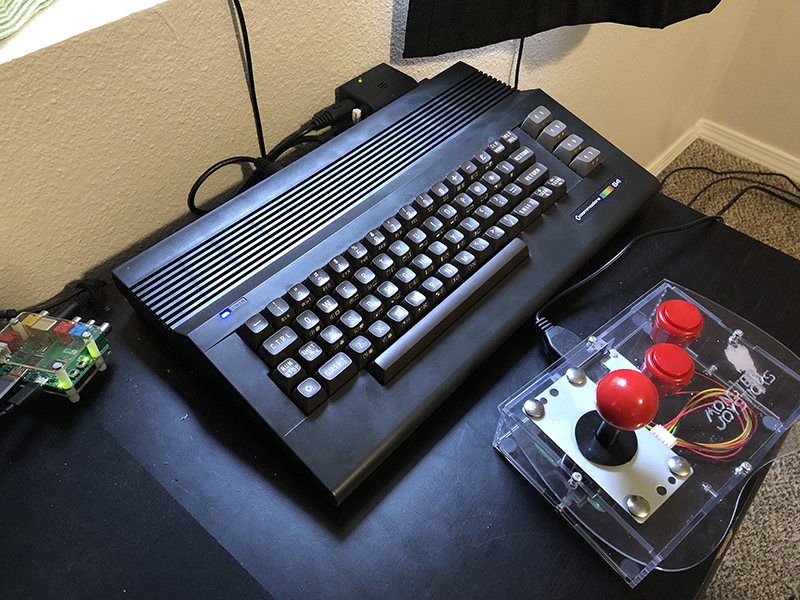 Since the RetroTINK 2x can output 240p, I wanted to send it to my OSSC for better upscaling, but I think I failed to get it to work last time I tried. (Update: I did get it to work, but picture quality was not improved.) So I use the RetroTINK's built-in 2x upscaler to get 480p and still have quite a nice image. I enjoy coaxing the best image quality possible out of old hardware. I think I remember reading that the C64 Reloaded didn't require LumaFix, but I still have some minor vertical banding. It's also possible the OSSC would help rectify that.

Here are some direct screen captures from the S-Video port on the C64 Reloaded sent through the RetroTINK 2x. 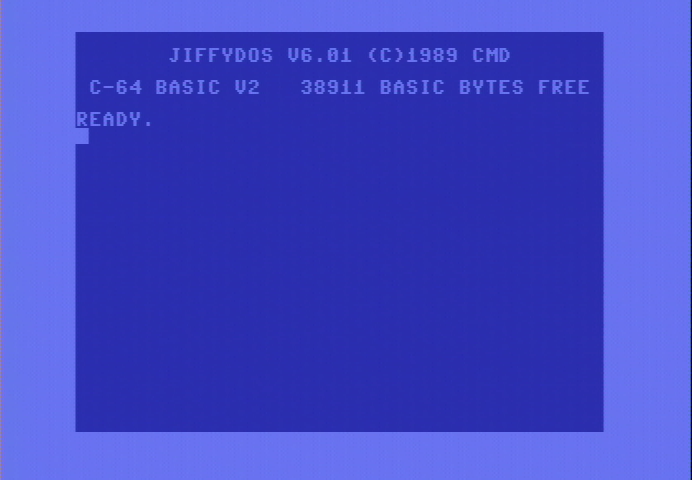 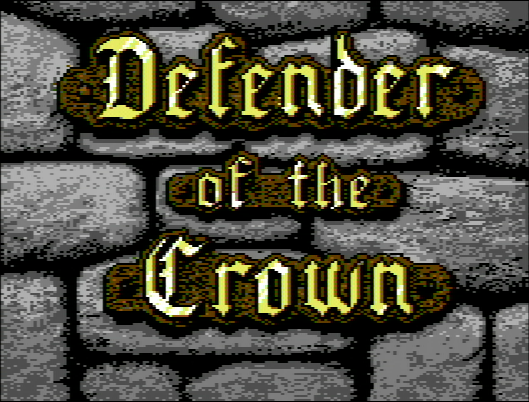 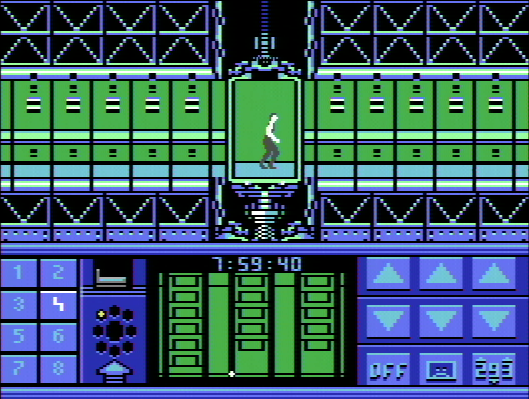 Gorgeous! Thanks for posting the pics. I have a nearly identical build, and I just LOVE the Mechboard combined with the MK2.

The only "hit" is the lack of the user port supporting WiFi modems. For such a gorgeous keyboard (I can actually type with this 64, which frankly was very difficult for me previously) it lightly crushes me I can't dial into my favorite BBSes with it. But other than that? Yeah - it's awesome.

I went with the yellow Gatreon switches, and I'm very happy with them. Extremely responsive with minimal effort and very accurate.

Thanks! Speaking of wi-fi, it sucks that the 1541 Ultimate II+ still doesn't support RR-Net (to my knowledge), but you reminded me that I also got an RR-Net MK3 from icomp along with this board. So I removed my 1541 Ultimate (RR-Net MK3 goes in expansion port) and used an SD2IEC instead. Loaded some terminal software and I'm online! Way easier than Amiga TCP/IP. 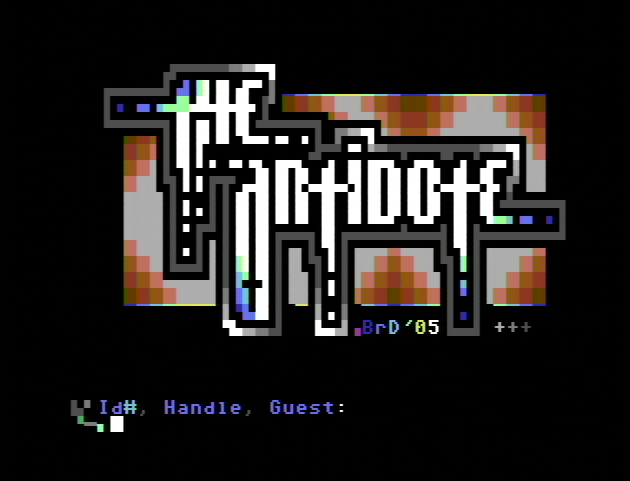 Awesome stuff there. Did you make the joystick yourself as well?

obitus1990 wrote:Awesome stuff there. Did you make the joystick yourself as well?

The joystick is a kit from Monster Joysticks that doesn't require any special machining or parts to put together, it only requires a screwdriver. So "assembled" would be a better way to put it than "made". It's a great joystick though, I'd highly recommend it over any of the ones that were made in the 80s or 90s.

Did you try to capture with a Elgato HD60S Device & RetroTink?

dansalvato wrote:Thanks! Speaking of wi-fi, it sucks that the 1541 Ultimate II+ still doesn't support RR-Net (to my knowledge), but you reminded me that I also got an RR-Net MK3 from icomp along with this board. So I removed my 1541 Ultimate (RR-Net MK3 goes in expansion port) and used an SD2IEC instead. Loaded some terminal software and I'm online! Way easier than Amiga TCP/IP.

The Turbo Chameleon 64 cartridge from iComp supports the RR-net. I've put a RR-Net MK3 into my Chameleon and it fits and works flawlessly. Also, the Chameleon emulates the 1541 very well, like the 1541 Ultimate II.

Love blue switches for the same reason. Awesome tactile feel. Noisey as all hell-but more retro than retro response from them. Really envy that setup.

I have subtle jail bars from my OSSC with Amiga input. Only on light solid screens (usually higher resolutions) is it really noticeable. Been close to pulling the trigger on the RetroTink for a bit now. Just keep finding other things taking priority at the moment.