Embrace What Brings You Peace

Work has been just nuts for me lately, which I realize I should be very thankful for. At the end of the night what I usually do is play games on the Amiga or C64 mainly, or visit some BBSes via Wifi modem (either on the A3000 or A1000 these days) to keep in touch with some friends around the country.

Last night, I was just too tired to focus on a puzzle laden game. I needed something to unwind and get to my center of Zen.

So I fired up Deluxe Paint III. Last year, for an art contest, I created an image of a Delorean flying with wheels up across an 80's synthwave landscape.

I very much enjoyed that exercise. It was relaxing, even though it was quite a bit of work. But it was fun work, and a great way to burn an hour or two each night until I felt I'd gotten the picture out of my head onto the Amiga's screen as close as I could.

Last night I decided to start working on a new piece. This is not the final work by any stretch, but it's a good start I think. I drew the logo by hand and very much enjoyed creating the red trim highlights and shadow effects. More to come on this one.

What are you all up to?

and world building to do a RPG campaign with my oldest (12). Going to run it in Fantasy AGE even tho he would prefer 5E. I am abstracting some of it from an unreleased CRPG, which I'm roughing out to convert to Amiga, but it is low priority, was called Fishguts.

This is my world so far (Wonderdraft is amazing), this is one continent of Longbrier, from a undrafted larger map. Large enough to have lots of adventures on. 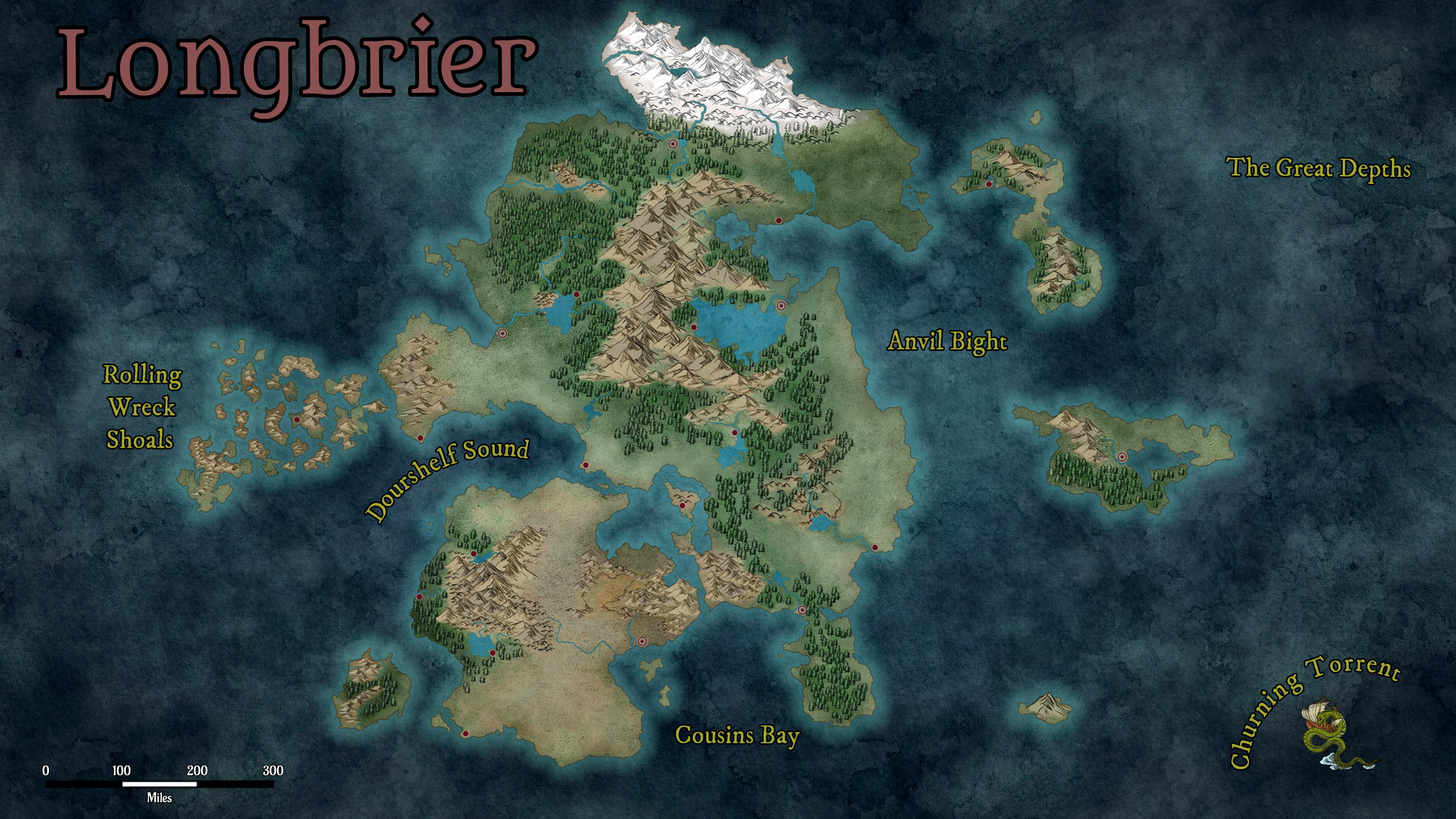 I am really digging the Ultima vibes there.

I am digging the logo. I miss those days of pixel art. I so want to free up some time to get back to it.

I am also digging that map. Nice job. Any Ultima like game is great in my book.


I have been trying to organize my mess of C64 disks and software. My Office with my computers in it is a disaster and I am overwhelmed by it. I am finally making headway with something I should have done 25 years ago when the stuff went into storage.

I started adding the characters. This is where this composition and my lack of mastery of Deluxe Paint starts to rear its ugly head. But, it's also where I have an opportunity to learn and get better. I had to actually pull out the manual last night to read up on color ranges (again) because the UX is so unlike anything I've used for the past twenty years. But I got it to work.

Drawing the little characters was actually a lot of fun.

It blows me away how much detail I am able to infer with just two colors on the man's upturned face. It's this beautiful mix of impressionism and CRT blending FTW.

When I first started this painting I intentionally picked a 16 color palette. I like to prove to myself that sometimes less is more. And while some games offer 32 while others 256 (looking at you Eye of the Beholder) if the time is taken sometimes many can't really tell the difference.

I think this is one reason - beyond nostalgia - why so may people love trying to bling out the graphics on the C64. It's a very limited platform, but the artistry it can expose is sometimes jaw-dropping.

Anyway, adding the people to the painting wasn't the hard part. The hard part involves:
But this is all good times. Great way to relax at the end of a very busy day and work on these puzzles.

I'm doing this entirely with a mouse, by the way. I have a NOS art tablet that supposedly works with Amiga. I should try to hook that up and see if I can get it working as part of this, even though my main drawing is already in place.

Loving the Tron artwork. One of my favourite films. So I am so way behind all of you. My machines have mostly been in storage with occasional play and backups occurring. I finally have the pieces to restore my 1200 to a working state with an accelerator in it. Still working on getting it to work on my broken Phillips 8833 mkII. Baby steps.

Turns out reversing gradient fills in DP3 isn't as hard as I thought it was. I was just dumbing it wrong. We don't have radial fills, but I can totally make this work. Sweet!

Would you like your green slimy moss to go this way? Or that way?

Last night I came up with a workaround for the lack of layers in DP, and I think this is serving me well.

After reading some of the tutorials in the back of the manual, it occurred to me that I could save off large elements in the painting as individual brushes, which is a very interesting feature DP provides.

This is not a perfect solution, but it's pretty close. The only "hit" is if I use the canvas color (in my case, black) that color is also treated as transparent. So large sections of my character's clothes became transparent when I saved them off as a brush. But that's not too big of a deal.

Here's an example of creating a "character brush". This movie was a test - not the real deal. I just wanted to prove my idea would work.
I'm going to see if I can get this piece completed by the end of the week.

It's time to do the rings, as a brush, once and for all! Time to do Flynn proud.


I'm really liking how it's shaping up now that I've gotten more educated (and flexible) around some of these tools. To think I did nearly all of the delorean picture by hand... lordy!

Guess you found out why he is called Guybrush Threepwood.

Calling my new Deluxe Paint painting done. I wish you guys could see my screen as the shadows on the disks really get lost here. Maybe if I make a few more pictures this year, I can pack them (and the Delorean) onto a floppy disk and mail them to people that might want them.

Anyway this was a fun way to spend an hour each night this week and take my mind off things. Hope you all find ways to do the same.